Quantitative Easing (QE) and YCC differ in a couple of significant ways. QE deals in quantities of bonds; YCC focuses on the prices of bonds. QE focuses on short-term interest rates; YCC can focus anywhere along the yield curve.

For example, if the Fed decided to peg yields on 10-year Treasury Bonds around zero percent, the Fed would make a standing offer to purchase any outstanding 10-year bonds at a price consistent with hitting the target yield. On days when private investors for any reason are not willing to pay that price, the Fed would step in and purchase more bonds to keep yields inside the target price range.

On Wednesday, March 17th, The Federal Reserve Board conducted their latest Federal Open Market Committee (FOMC) meeting to discuss monetary policy. At this meeting, the Federal Reserve repeated its pledge to keep its target interest rate near zero “for years to come.” Based on the Federal Reserve’s stated policy on interest rates, they are likely to use the tools available to them, including YCC, to reverse the current trend of higher interest rates to accommodate markets until the economy can recover. Should the Fed implement yield curve control, as Japan’s central bank already has, to drive interest rates lower, now may be an opportune time to buy gold and other precious metals.

As the saying goes, “don’t fight the Fed.” We have to understand that the Federal Reserve is playing a careful balancing act, trying to please equity markets, international debt holders, and the Treasury market at the same time. In 2007, the Federal Reserve and European Central Bank began their emergency asset purchase programs, known as QE. These were supposed to be temporary measures, and yet they are still with us today.


Asset purchases have not stopped, at least not for long. Recently, to “stabilize” the economy, the Fed’s been buying junk bonds and an estimated $8.7 billion in bond ETFs. How can investors still doubt the lengths to which the Federal Reserve will go to keep interest rates low and defend the market from higher interest rates? But it is not only markets that will suffer from higher rates.


The debt to GDP ratio is already over 100%, and the U.S. is now paying more than ever in interest on absolute terms, even though interest rates are historically low. The bottom line is that the U.S. cannot afford higher interest rates because our debt payments would skyrocket, especially after the recent $1.9 trillion stimulus bill. The last time the United States had such a large debt/GDP ratio was during the second world war.

Yield Curve Control is not new

Yield Curve Control (YCC) has been used before both in the United States and abroad. Starting in 1942, the Fed capped short-term rates at 0.375% and set a ceiling for the 10-year Treasury rate at 2.5%. This meant that the Federal Reserve would create as much new money as was necessary to maintain the ten-year treasury bond rate at 2.5% Now, here’s the interesting “paradox” that can take place with Yield Curve Control. As long as the market believes the Federal Reserve is committed to maintaining these rates, it doesn’t necessarily need to increase its balance sheet. This is what happened in 1942, and it’s what we have seen more recently with the Bank of Japan. 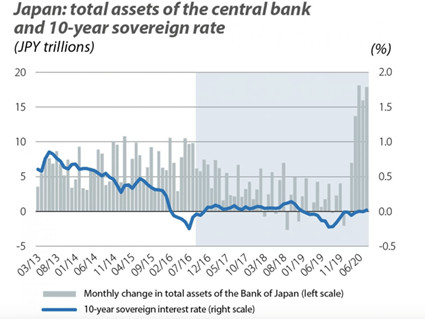 
The Bank of Japan (BoJ) started implementing YCC in 2016. The BoJ has maintained 10-year rates at near 0 with less intervention in the market than in the past under QE. The Central Bank of Australia has had similar results. So, we expect that the United States will, at some point, introduce a form of Yield Curve Control. The biggest problem with YCC, though, is exiting it. Exiting YCC proved hard in the 1950s, and it will probably prove impossible this time around. Once we begin YCC, there will be no turning back. Perhaps it will be at this point that the tower of debt will crumble, as it becomes evident that the Fed and United States will only be able to honor their promises through the printing press.

If there is a convincing enough case to believe the Federal Reserve will begin YCC, much like the European Central Bank (ECB) announced last week, there is at least one thing you can do: buy gold, silver and other commodities. The key here isn’t that interest rates might be low for a more extended period, but that YCC could lead to negative real interest rates. Negative real interest rates occur when interest rates are lower than the inflation rate. If the Fed does decide to cap longer-term rates (YCC), we could witness negative real rates. Through a combination of artificially lowered interest rates (YCC) caused by substantial money printing to purchase bonds, leading to higher inflation at the same time. At this point, most people are expecting rising inflation. Why? For one thing, the Fed has already stated that it is happy to tolerate higher inflation above its 2% previously mandated threshold. And for another, the United States, and most developed countries, are using COVID as an excuse to ramp up fiscal policy (printing money to give directly to people). Under the current stimulus plan, the money isn’t going into bonds and financial assets, like the Fed’s previous purchases. This time, at least some of it will go directly into Americans’ pockets, and they’ll spend it. This could cause inflation to take off in earnest. 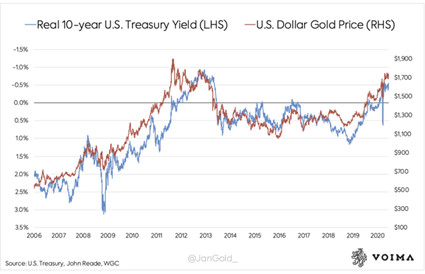 The above chart shows the strong negative correlation we have witnessed between real interest rates and gold prices. In the graph above, the yields are reversed so that the top numbers are the negative ones. As you can see, the more negative the real interest rate, the higher the price of gold. And, of course, the same goes for silver. Silver may outperform gold due to the current historically high gold/silver ratio and silver’s growing industrial uses.

We believe that investing in gold, silver and other precious metals may be an excellent way to hedge inflation and the dollar’s declining value. iSectors has created an ETF-based model for advisors to help their clients own gold, silver, platinum, and palladium bullion in a simple, cost-effective, and liquid manner. Investment advisors can access iSectors Precious Metals Allocation through numerous third-party, turnkey asset management platforms (TAMPs). For more information about iSectors Precious Metals Allocation model, please see the model profile here or feel free to contact Scott Jones, Director of Business Development at iSectors. He can be reached at 800-869-6184 or by e-mail at [email protected].